Picked up Jack as I retrieved our car in Tok. He's from Ontario, and was hitching his way as far north as Fairbanks. Jack was carrying a gas jug and a duffle in Tok, about four hours from Fairbanks. 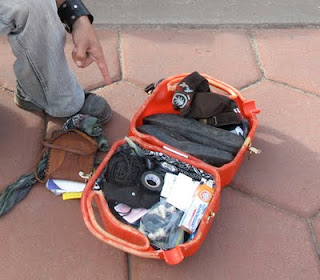 His jug was a phony, a gimmick to entice drivers to pick up a kid who has run out of gas. It's really a suitcase. Cracked me up to see his shoes inside.

I didn't pick him up because I thought he was out of gas. He reminded me a bit of a bygone version of me (I once hitched from Fairbanks to New York). He also reminded me a bit of Chris McCandless. Jack called the other day for advice on how to get to the Bus. He's probably out there now . . .
Posted by ned rozell at 11:48 PM

Love the gas can trick. Years ago I picked up a guy in Montana doing the same thing with a metal gas can.