A boffo review of Finding Mars 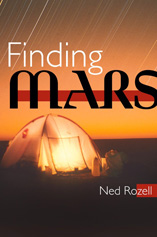 From the Anchorage Press:

Finding Mars
By Ned Rozell
University of Alaska Press, $22.95
That overused adage, "don't judge a book by its cover," is particularly accurate when applied to Ned Rozell's enchanting Finding Mars. The cover photo of a glowing tent and orange sky doesn't do this story justice, and neither does the short synopsis of the author following Japanese permafrost researcher Kenji Yoshikawa through northern Alaska. What one might think would be a purely scientific and rather dreary tome is so much more, a story of an incredible wanderer and adventurer written with beautifully descriptive prose that draws the reader in immediately.
Rozell weaves Yoshikawa's current permafrost research and past adventures together expertly, taking the reader back to the first outward signs of Yoshikawa's wanderlust when he was in third grade and would dream at night of visiting Mars, and during the day grab a bicycle and explore the vastness of Tokyo while his parents were away.
"Young Kenji showed an early desire to travel. His favorite schoolbook was an atlas, which he still owns," Rozell writes. "As a child he stared at maps of the Sea of Japan and the East China Sea and wondered if they were somehow different, these seemingly connected oceans with different names."
His thirst for discovery would drive him to ride a bicycle solo across 2,000 miles of the Australian outback, and then push a cart across the Sahara.
Yoshikawa's curiosity also took him to the Amazon where he fashioned a dugout canoe and attempted to paddle the length of the mighty river upstream, hoping to paddle 60 miles a day for 60 days.
The choice of paddling upstream is revelatory of Yoshikawa's philosophy of discovery. "Life is this way, right? Upstream. You don't know which way you go. Sometimes you have a right to choose. Sometimes it's not you. God, or somebody else, choose," Yoshikawa told Rozell. "I want to test my destiny. The unknown is much funner than downstream."
When his interests turned to the Arctic he prepared by spending countless hours living inside a walk-in freezer, and constructed his own sled (a later model would incorporate frozen salmon carcasses in the design so he could, theoretically, eat part of his transportation should he run short on food). He also designed a special biscuit based on the Inuit diet of 34 percent fat, which consisted of egg yolk, powdered milk, Parmesan cheese, mashed potatoes, and several other ingredients that knocked the calorie count per biscuit up to 2,000. Just two biscuits a day would sustain him in harsh climates, he reasoned.
All of these adventures, and countless more, are related as Rozell follows the determined scientist throughout Alaska as he samples permafrost hoping to create a map of where Alaskan permafrost lies on a whirlwind tour of 17 villages on the Yukon Delta, the Bering Sea coast, and the Chuckchi Sea in just 16 days.
"Maybe, in this landscape buckled with frost polygons that still hold the cold from twenty thousand years ago, Kenji has found his Mars," Rozell concludes. Whether he has or hasn't, Rozell does an admirable job relating the odyssey of a man who has seen more of this planet than most.
-Susy Buchanan
Posted by ned rozell at 5:44 PM