Jack, the hitchhiker, left a message on voicemail:

"The rivers were a little tricky but I made it to the bus. Thanks for the help. I'm on my way south."

I was relieved he made it out and back across the fast, cold Savage and Teklanika rivers, the latter of which doomed Chris McCandless by turning him back to the bus in 1992. And a tip o' the cap to Jack for calling, an easy thing not to do for a person on the road.

I visited Bus 142 once, on March 11 of this year. Eddy Plumb invited me along at the approval of Chris McCandless's parents, his mom Billie and his dad Walt, for whom Ed was guiding a trip. There was a band of 17 people heading out by dog team and snowmachine.

The McCandlesses wanted to travel to the bus, probably for the last time, because they wanted to reward their friends who had helped them complete a book, Back to the Wild. The book is a collection of Chris's photos, many of them never published before. It's now Amazon's 4,900th bestseller. That might not sound like much, but I was pretty happy when Walking Jane got below 100,000 after I was on a national radio show.

I wrote a story for Outside magazine on the book and the trip to the bus. It appears in their July issue. Following are some photos from the trip, which happened for me because Nancy and Jay came through when I was on single-daddy duty. 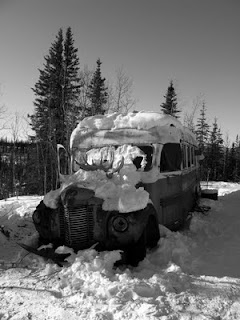 My first view of the famed Fairbanks Transit System No. 142. It's on a nice little plateau above the Sushana River, about 23 miles from the Parks Highway. Took us about three hours to get there on a glorious March day. No problems with rivers; in March, you walk across them like Jesus. 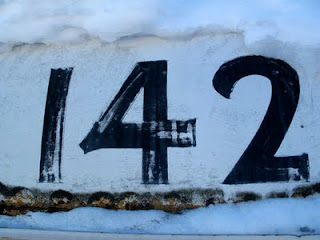 To some, the new iconic symbol of Alaska wilderness and chucking the American Dream. 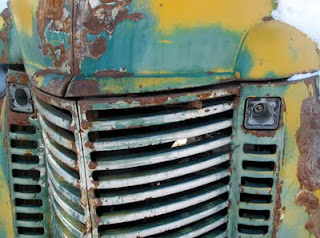 And the face of the Bus, witness to many pilgrims. 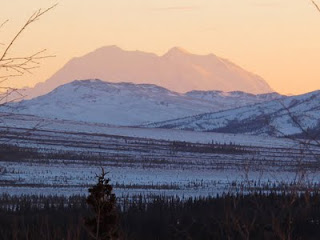 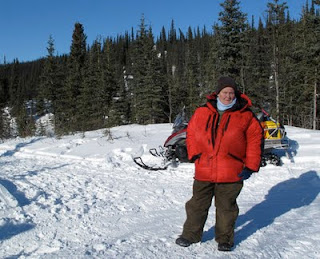 Jan Burres, Chris's friend from "the Slab" in the California desert, now a friend of his parents. She seemed truly moved by being out there. 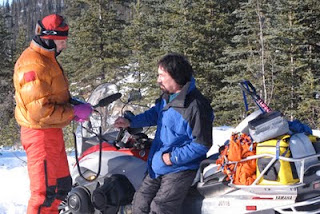 Dan Bross of KUAC radio came out on his own machine with his daughter Tjarn. Here he is interviewing Wayne Westerberg, of Carthage, North Dakota. When I read Into the Wild, I thought that when Krakauer found Wayne and profiled Carthage, that must have been the moment he knew he had a good book. Wayne's chatty and forthcoming, and he really liked Chris McCandless (and was the one to whom Chris sent the postcard from Fairbanks telling him he was headed "into the wild.") 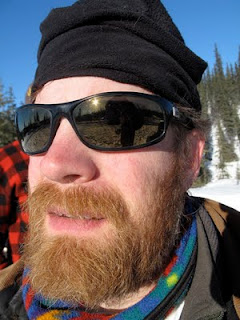 Jamie Hollingsworth of Fairbanks was part of Eddy's Dream Team of snowmachine and dogsled drivers who brought the McCandlesses out to the bus. With Jamie, Mike, Bernie and Andy along, I was hoping something would break just to see how fast they fixed it. (And a wooden sled upright did break on the way out. Five minutes.) 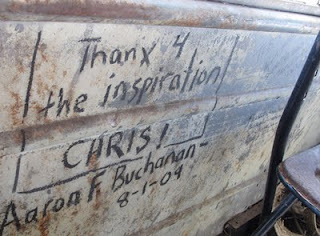 The Bus is now coated with messages. Most reverent . . . 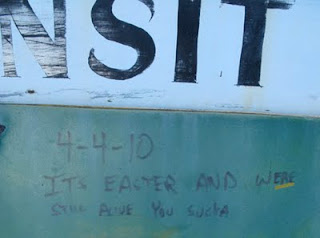 some not . . .  I land somewhere in the middle of the Chris McCandless debate. He set himself apart from most people when he burned his money in the desert (have you ever destroyed a $20 bill?). But also note that he took a photo of it burning. So, he was sending a message to someone who probably wouldn't understand it. I admire his view that the current American model of career and mortgage and constant growth to fuel the economy is flawed. I think most people would not last as long as he did out there (have you ever skinned a porcupine?). I also liked Krakauer's book and Sean Penn's movie. But they are works of fiction. Chris McCandless is dead, and with him went his motives and the real story of his life and death. Krakauer found a nice connection between himself and Chris and made it into good reading, so good for him. Sean Penn did the same with the movie (the final scene depicting Chris's dying view of spruce branches was spot-on Interior Alaska), so good for him. And, if so many people pull some deep meaning from Chris McCandless's story, good for them. 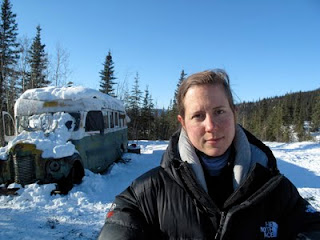 Heather Horton, an artist from Ontario and friend of Ed's, once contacted him for information on the Bus. He guided her in by bike and packraft, and they've been friends since. Heather also befriended the McCandlesses. She got them together with Ed for this trip, her fifth time to the bus. 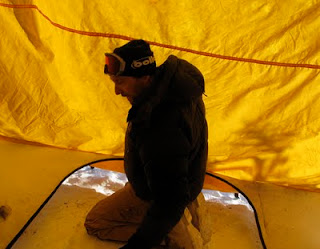 Here's Eddy, cleaning the tent after being busy serving hot chocolate at the bus. He may be too good at complicated wilderness logistics to complete his career as a hydrologist. 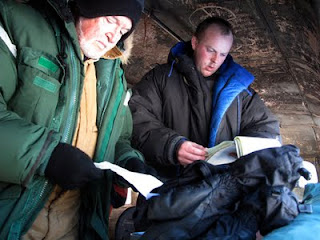 Walt McCandless and family friend Aaron Dunlap read through the journals in the bus. Walt had been there 17 years ago, by helicopter. 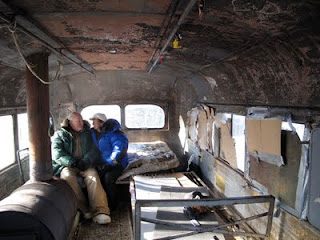 And then, as the sun sank after almost 12 hours in the sky, we all went home.

Nice blog entry, Ned. Must have been an interesting trip. I haven't been out there yet. Maybe some day.