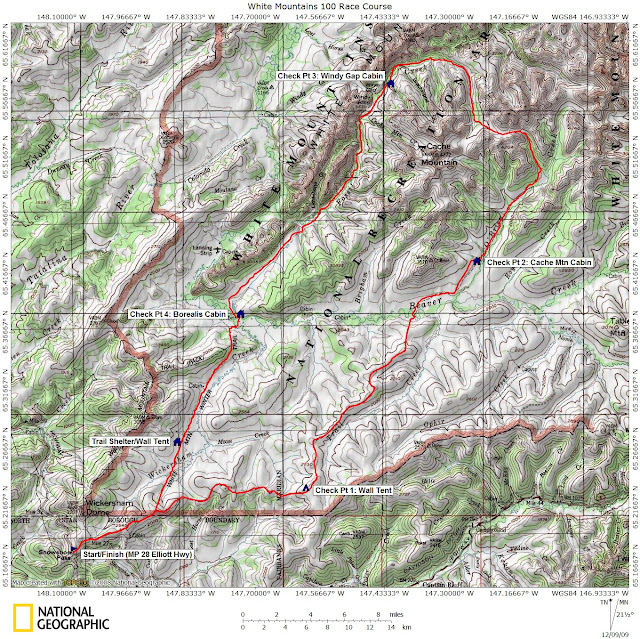 Because we no longer chase bison with spears, we humans need new challenges to fill that void. One way to scratch the itch: push the body machine to see what it can do.

Running 100 miles today is perhaps equal to what running 26.2 miles was a few decades ago. Something that seems impossible, but other people have done it, so it must not be.

The foot division of the White Mountains 100 has intrigued me since the race started seven years ago. I'm a skier, but have seen those people at the starting line with the sleds and running shoes and wondered what their long experience must be like. Where does your mind go when trying to cover 100 miles at less than four mph?

I have signed up for the race as a runner before but have always gone back to what is comfortable, switching to skis and the predictable fast downhills and less time on my feet. But this January when race organizer Joel Homan offered me a spot on the roster, I said yes as a runner and didn't consider any other method. 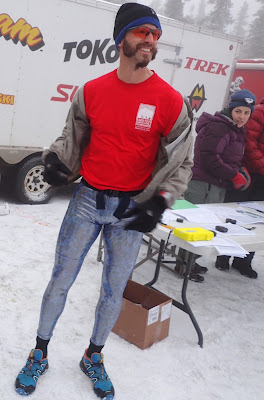 Shooky also signed up as a runner. He had also skied and fatbiked the race, and if he finished this year he would be the first to complete the 100-mile loop using all three methods. I think that's a pretty cool accomplishment. Back in January, I went on a training run with John. It was the first run that had felt fun to me in quite a while and got me started.

I tried to copy John's preparation for the race. Shooky has everything dialed in. He ran 20 and 30 milers on back to back days and stuck to his training schedule. My favorite training day: After I gave a public presentation at Morris Thompson center I arrived at the Nugget Creek trailhead as darkness fell. I strapped on a headlamp and ran the 20-mile Stiles Creek loop. I jogged back to the car, attached a sled to myself, and ran 7 more miles to near the Nugget Creek cabin, where Kristen and Anna were sleeping. Because it was 3:15 a.m. and I didn't want to wake them, I pulled out my bivvy sack, pad and sleeping bag and slept on the trail. 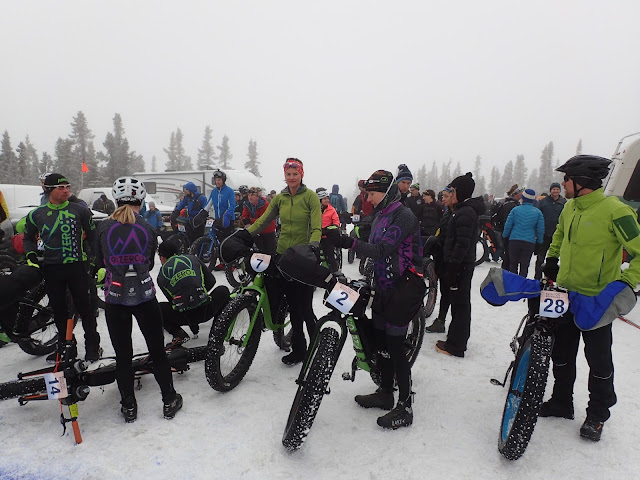 Race day at 8 a.m. Warm with a moody fog. Here's the fatbikers at the start, ready to leave we slower people hours behind. I admire people who appear calm at freakout time. Heather is ready to go. David Fee, 28, isn't doing much fiddling. 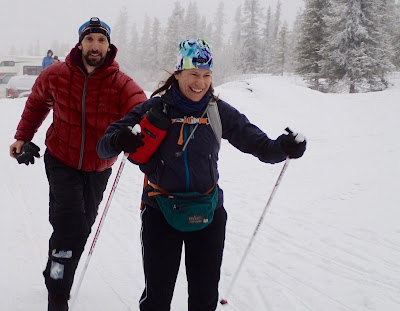 Kristen didn't get a fast start, either. She did get a hug from Eddy, who invented the White Mountains 100 in 2010. He stepped out from under from the weight of directing the race a few years ago but volunteered this year checking in racers at the start.

Kristen didn't get the ideal training miles for the race but she never complained about it. She did line up friends and neighbors to watch Anna while we both did the race. We won't win Parents of the Year for both choosing to do things like this that don't include our 9 year old. But we both love to move on the snow and challenge ourselves. It's a selfish desire and I feel guilty about it at times. 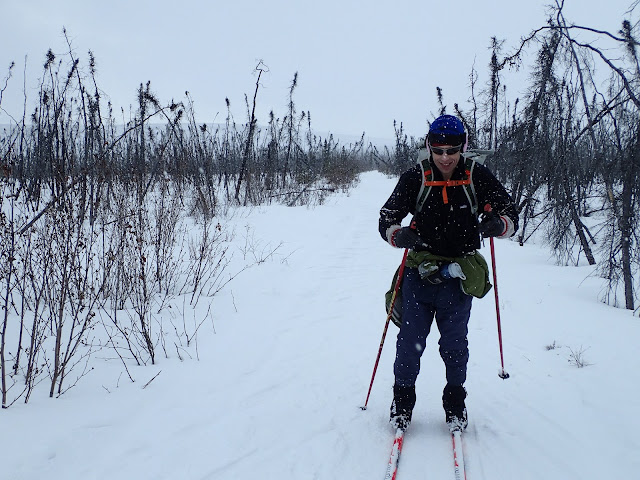 My jogging/walking pace was pleasantly equal to the skiing speed of my friend Andy. Travelling together made us think of so many other trips we've shared. Skiing from Nabesna to McCarthy, Tanana to Allakaket, Nenana to Nome.

We were together for nine hours. Sharing snacks, stopping for pee breaks, grinding along. It was a great way to start the long day.

Andy and I arrived together at the second checkpoint of Cache Mountain Cabin. It was 39 miles into the race. We were happy to see the volunteers, including Stan Justice, Equinox Marathon record holder and Fairbanks icon.

Here, I removed my running shoes and summer-weight socks, which were soaked. I pulled out my shoe liners and set them and my shoes by the woodstove. I pulled a dry pair of socks out of my backpack and put them on after my feet had dried. I carried three pairs of socks, my one indulgence in a pack that weighed less than 10 pounds.

As I ate my baked potato with sour cream and bacon bits, I looked over at Andy sitting on a bunk. He stared straight ahead at a time he would have been eating if he had felt better. He had been sick in the week before the race. He also broke both legs in a climbing accident a few years ago. His recovery from a two-week coma was just about a miracle.

He came over and sat by me. "I'm not feeling confident I can make it over the divide," he said softly.

He decided not to continue. I gave him a hug and headed out for the trail ascent of Cache Mountain Divide. 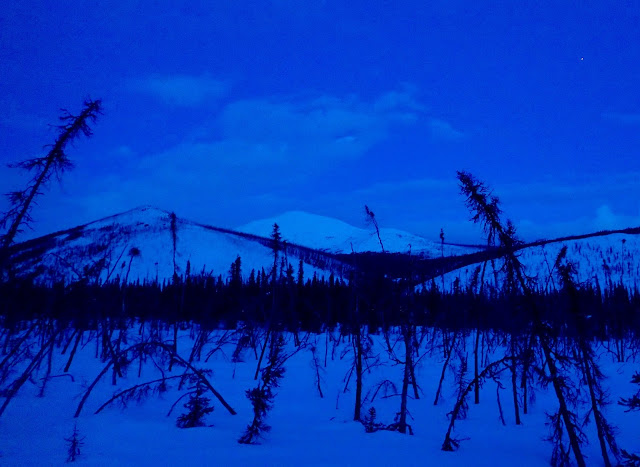 Headlamp time. I was sad to leave Andy behind but relieved he'd made the right call. As I was traveling with almost nothing, not even shoe covers, I had nothing but good words to offer anyone.

I really enjoyed the descent into darkness. When I stopped, the world was absolutely silent.

To my surprise, I could still jog the slight uphill leading to O'Brien Creek. As the trail dropped onto the creek proper, I wished I was carrying my bivvy sack and bag. I would have shut 'er down in those big spruce trees by the patch of open water.

As the trees thinned and I neared the low pass (about 3,100 feet), I saw the white dots of two headlamps. One was Eric Troyer, who was pulling a kicksled. The other was Jessi, a woman from Seattle hiking a great clip with ski poles.

I caught up with Eric near the high point. I didn't think much of his idea of pushing a heavy sled over the course, but here I hadn't caught him until the midway point. And when he zoomed away into the darkness on his sled I wished I was him. 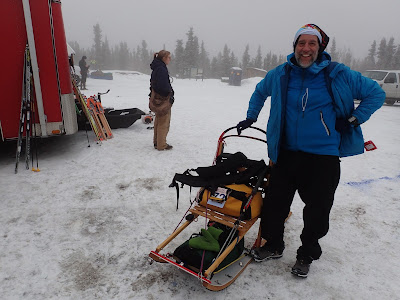 Eric Troyer at the race start

After Eric left me, I was alone in the dark until I met Jamie Hollingsworth at his wall tent. He sets it up at the end of an area known as the ice lakes because lots of people have trouble there. When I saw the big bear, he spoke to me.

"You're the last one. The runners behind you quit at Cache. I'm going to break down the tent and I'll follow you to Windy Gap."

Jamie passed on snowmachine a few hours later. Then, a few miles short of Windy Gap Cabin and checkpoint No. 3, I had my low moment. 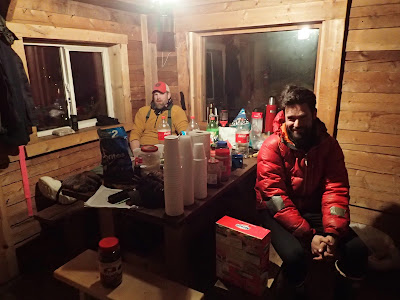 The volunteers at Windy Gap cabin were 20 hours into their day. Despite this, a woman named Lindsey rose from a bunk and asked me and Erik if we wanted some meatball soup. As we were the final racers, she kept offering us meatballs. I ate 26 of them. Things were looking up.

I left the cabin with my headlamp on, but dawn light bathed the trail in blue. I said some bad words as I punched through shin-deep water on Fossil Creek, but the day was warm enough that my feet were in no danger of freezing.

My spirit sang as the sun climbed over the hills. I noticed I again had a tailwind. I thanked my late friend Brian Jackson for it. I thanked my late mom and dad for giving me resilient joints upon which I was still jogging. I was quite happy to be in one of the prettiest place on the course, a spot I've rarely been because it's so far from the road.

Seventy miles in. Still jogging. I was surprised how natural it felt to run rather than walk.

And there was Mark Simon. He had a wall tent set up at the midpoint between Windy Gap Cabin and Borealis Cabin.

He also had coffee. He boiled me some water and made me a Starbucks Via Dark Roast. My God coffee has never tasted better. Mark's encouraging words, the Via and the sunshine made this section of trail a favorite. I had been on my feet 25 hours. 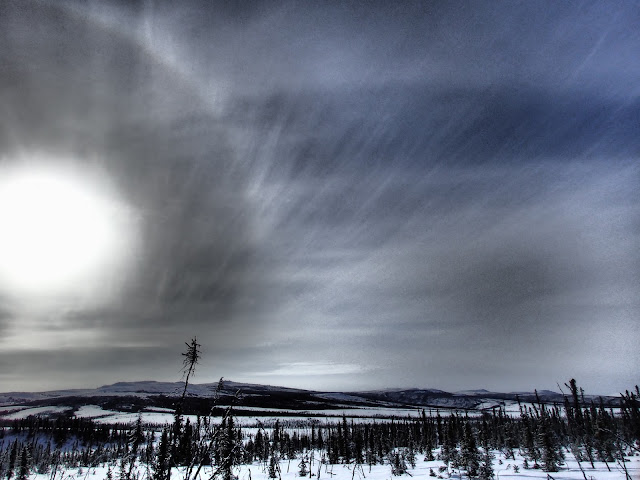 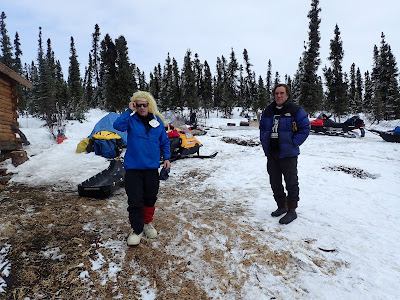 An all-star team of volunteers was embedded at Borealis Cabin, 80 miles in. Ralf, Bob, Trusten, Rourke and a few others with thousands of wilderness miles under their feet. They got back in character for their political theme, with Bob here posing as Hillary.

Trusten boiled me some water for a Ramen while I switched into my dryest wet socks for the final 20-mile push.

I did some mental math and figured I would make the 40-hour deadline if I continued jogging. Another goal was to finish the race without firing up my headlamp again.

Each person in the cabin told me how good I looked even though I didn't. Those positive words have such incredible value. It's a magic element of the race that you don't feel in training with self-critical you. 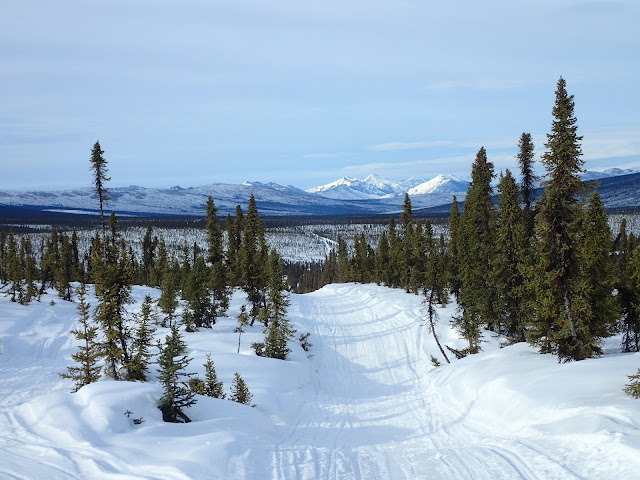 As I hiked up the Wickersham Wall, a steep hill nine miles from the finish, I stopped and turned around. There I saw Cache Mountain and the other peaks of the Whites. It hit me then: I had just circumnavigated those mountains on foot!

And I had been on my pins for 36 hours at that point. It was the frontier, Lewis & Clark Time. How did I feel? Competitive!

Eric's wife and my doctor Corrinne Leistikow showed up on her fatbike.

It was a battle for the red lantern. Even though it would be cool to be dead last, I did not want to see Eric's kicksled gliding by.

So, quite stupidly, I ran harder down the hills near the finish. Stars and crescents were shooting from my knees and ankles.

Then, from a distance, I saw the most lovely sight on the planet: 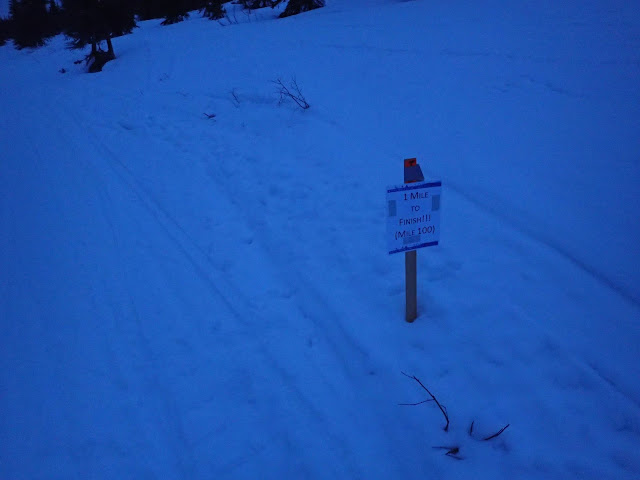 Despite the effort to bend, I hugged this sign. I kissed it.

I jogged the mostly downhill mile, struggling to see trail definition without my headlamp.

Then I saw a familiar bob of light heading up the trail. Andy!

My friend had returned to drive me home. Kristen was home with Anna, who had school in the morning.

We hugged and jogged down the trail.

Lena Krutikov came up the trail to greet us. She escorted me into the parking lot I had left more than a day before. I smiled at the colorful grafitti someone had painted on the snow. I blinked and the colors disappeared.

Shadowed volunteers exited a motorhome and cheered me over the line. 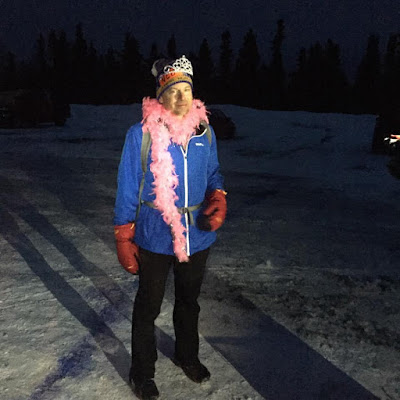 I stepped into the trailer and Heather, volunteering after finishing more than a day before, handed me a Carl's Jr. double cheeseburger Kristen had sent up with Andy.

I munched it while Joel took a compromising photo of me. Finished.


Thirty-eight hours. A friend pointed out that I was moving for a work week. 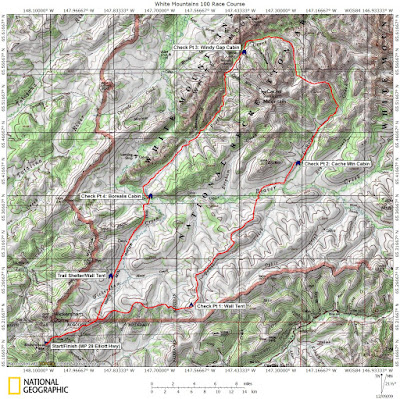 I don't mind saying this: I'm amazed at what I was able to do. I ran much of the course, even at mile 99. With Eric placed in the ski division, I was the last runner. I'm quite happy with that, and even more I finished before a cold rain poured down when Andy was driving me home.