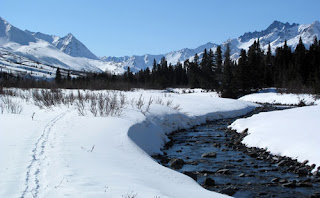 Yeah, it's still winter here. At least it was a few days ago, when Michael Gibson and I skied a loop through Denali National Park, sleeping four nights under the stars, seeing no one out there except a thousand ptarmigan. 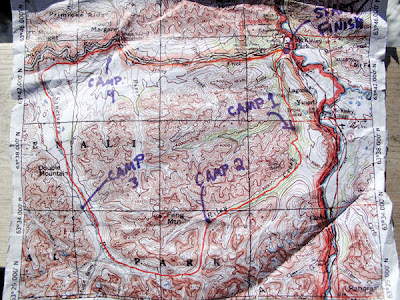 We skied and walked the 70-mile loop from Riley Creek campground, through a mountain pass, down the Sanctuary River, and then back on dog sled trails and plowed park road to Michael's car. 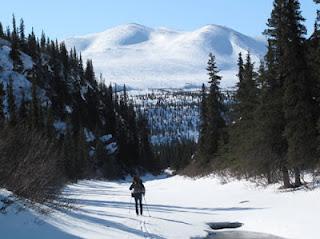 Michael was my wilderness classic ski race partner last year in the Brooks Range and in '09 (the Wrangells). This year we did something closer to home. We also chose a shorter route, bivvy sacks rather than a tent and a lightweight cook stove better suited for summer travel. Our packs didn't have the lurch-off-the-line weight, and most of our time out there was pleasant and warm. It was "Classic Lite." 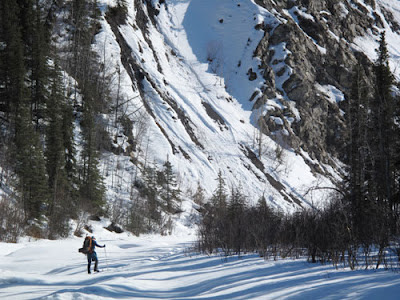 We were just two hours from home on Riley Creek, in a world of canyons and caribou. 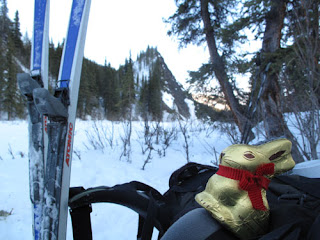 A chocolate bunny snuck his way into my pack (thanks Kristen). 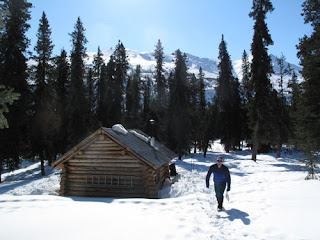 Way up Riley Creek, an unknown-to-us ranger cabin, made the same year as my daddy. 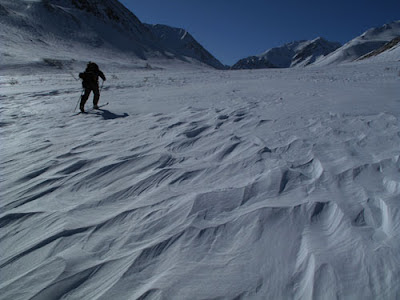 Michael led us into a low, windy pass that sends water to both Riley and Windy creeks. 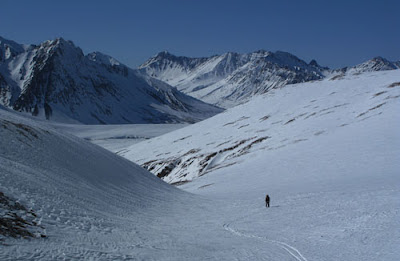 After skinning up and over the pass, Michael ripped 'em off and slid down the headwaters of the Sanctuary River. 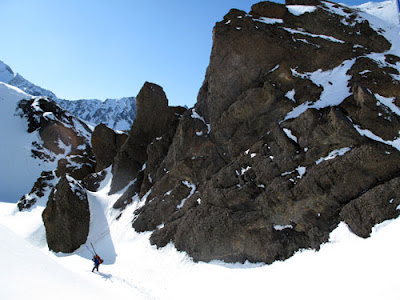 Would love to see the snowmelt roaring through this tendril of the big river in a few weeks. 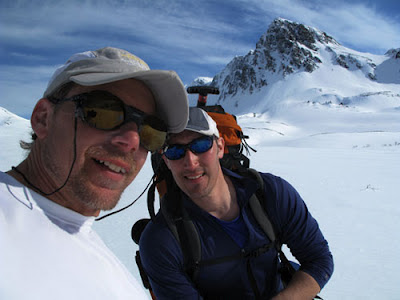 Michael, right, always leads through the passes (and for most of the miles of our trips). I'm happy to follow his tracks through the high country and even happier when we get to the other side. 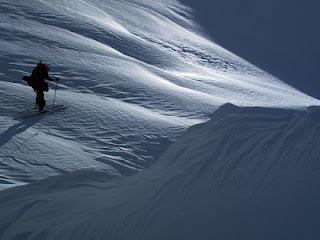 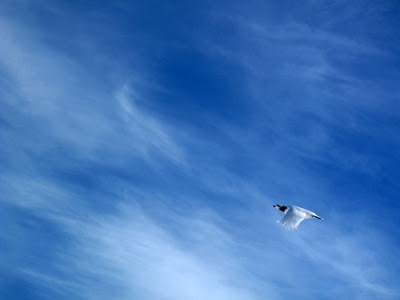 The upper Sanctuary River is a mile-wide wind tunnel that was wall-to-wall sastrugi, with no soft snow anywhere. Male ptarmigan rule up there. When they are not chasing each other, they chuckle like maniacs on top of snowdrifts, waiting to be nailed by goshawks. 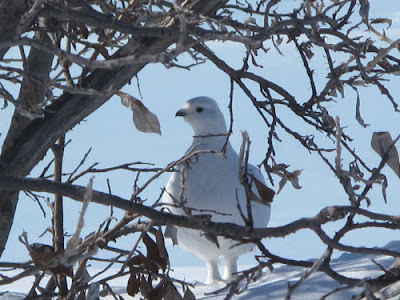 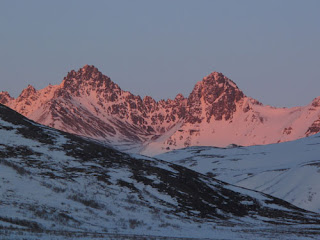 We circumnavigated Fang Mountain on this route, seeing it pop up on different days. 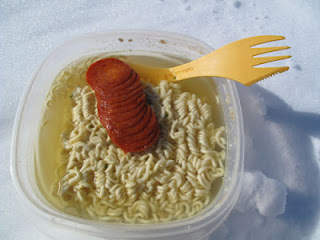 With time to squander in the heat of these long days, we stopped to cook up a few fifty-cent lunches. 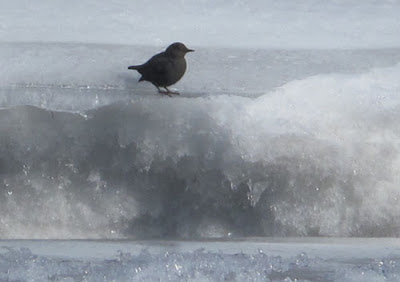 On the lower Sanctuary, one of my favorites, a dipper. The dipper survived by diving into this open water for its meals of underwater bugs every day of the winter. Even January, when the average temperature for the month was 30 below down here.

Sanctuary wolfpack made it through, too. 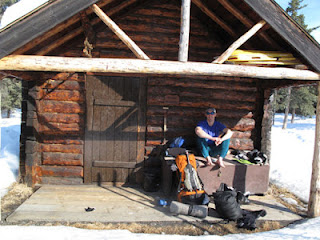 The cabin, built in 1925, where the Sanctuary River meets the park road. After skiing our own trail on the glare ice of the Sanctuary River, we couldn't find the expected dog trail here because the dogs ran the road during the winter and the trucks have plowed it to gravel. A little pre-trip research would have told us that, but we like surprises. 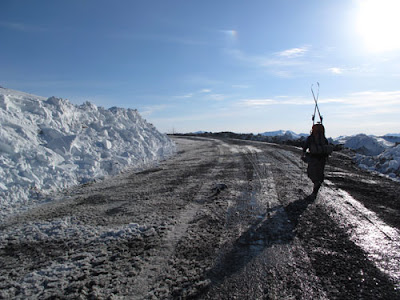 It was shoe-leather time, until we found the dog trail again in a pass between the Sanctuary and Savage rivers. 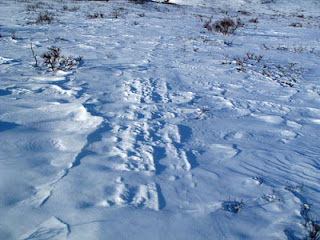 After a big windstorm, the trail was hard to find, but still firm if you stayed on it. 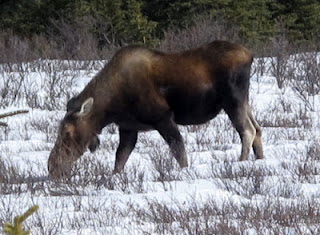 The bulge in this moose's belly will be one or two orange calves in about a month. 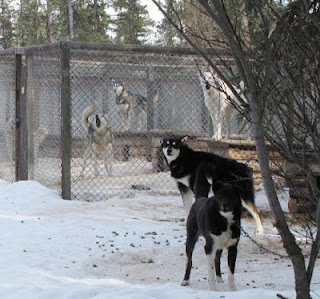 After a day of spring skiing so warm that red wax wouldn't give any kick, we skied into the dog kennel at Denali Park, and neared the end of our trip. 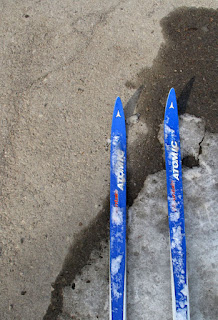 From the kennel, it was on to the pavement for another hike, a bite from the first mosquito, and then a bit of skiing through slushy snow back to Michael's car. After dinner at Rose's Cafe, we were home before dark. Goodbye best part of a long winter.