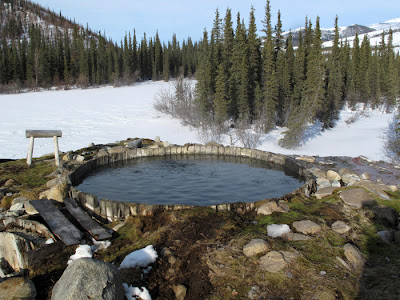 Melozi Hot Springs — Nobody there for at least six months before we arrived. The pool is clear, bubbly, clean. Warm. 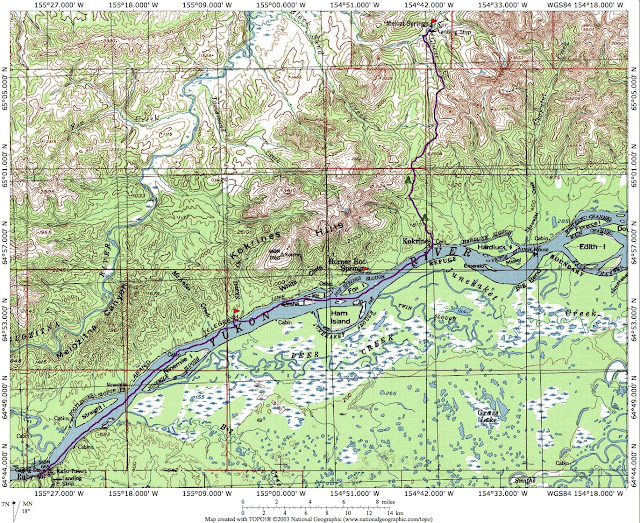 The route. From the fertile mind of Eddy Plumb. Flight to Ruby, ski 15 miles to Sam and Tamara's. Next day, on to ghost village of Kokrines, then up an old trail to camp. Up and over a low pass on hopefully still findable old trail to Melozi, itself a ghost town. 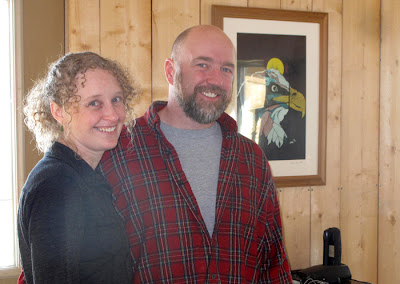 Tamara and Sam Clark at their white spruce homestead between Ruby and Kokrines. 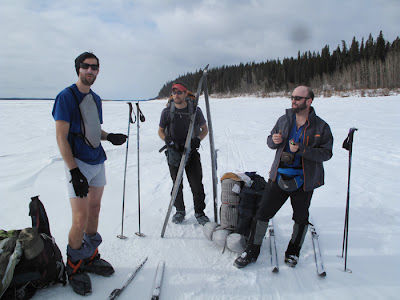 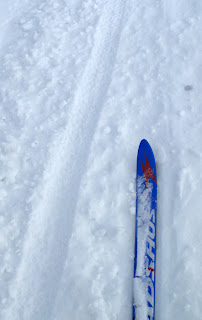 On the Yukon, a surprise: the fatbike track of Billy Koitzsch, who was then pushing his bike on a quest to be the first person to ride from Anchorage to Nome to Fairbanks (he did it!). According to his SPOTs, we were about three hours behind him here and moving twice as fast as he was pushing. We really wanted to catch him and take his mind off the Yukon, but we turned off for . . . 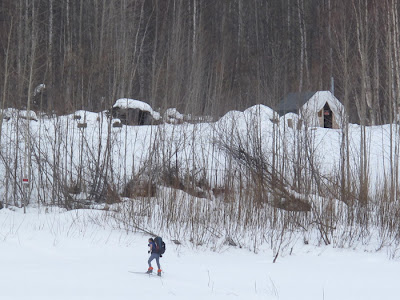 Kokrines. Once a village of a few hundred. Now on the maps as "Abandoned." 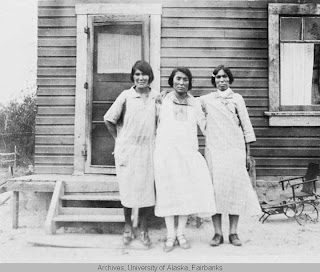 A photo from the UAF archives, circa 1925: Monica Silas (middle) stands with two unidentified women at Kokrines village. 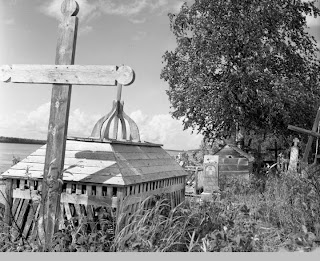 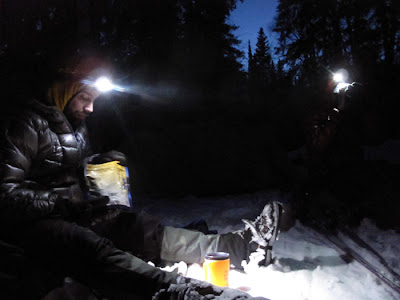 Camp on the Kokrines to Melozi Trail. Sleeping outside, boreal owl soundtrack. 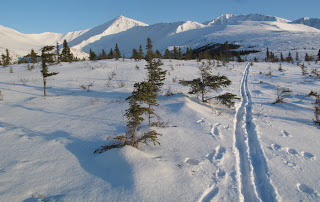 With skins, we hit the high country of the Kokrines Hills to stay away from the alders. Lost the historic trail early, so we cut our own track. 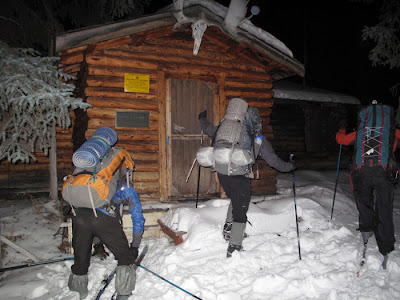 After a 15-hour day, the lodge at Melozi Hot Springs! Abandoned in the late 1980s but with a sound roof and the feel that someone left a few days ago. Spooky but cool. 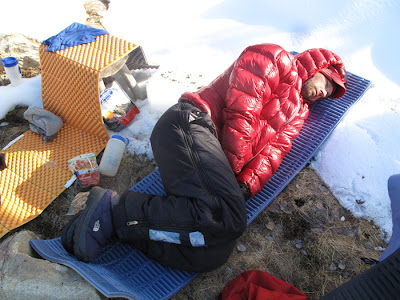 Eddy, who directed another great White Mountains 100 during the week (and, ho hum, skied 100 miles himself, as did Shookie), catches up by the springs. 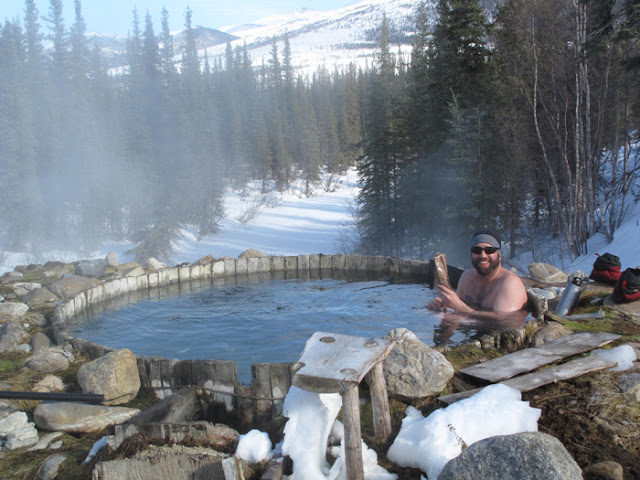 Brian heartily enjoyed an MRE (Meal, Ready to Eat) while soaking. And the sounds of a dipper singing below, on Hot Springs Creek. 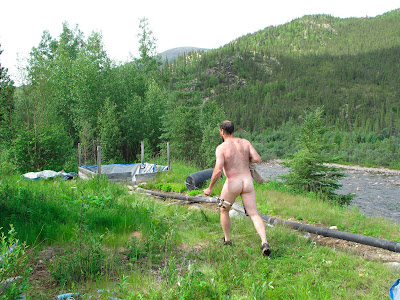 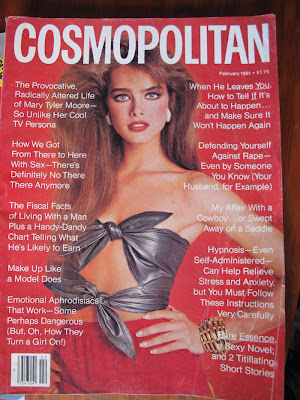 And, inside the lodge, Brooke Shields in a mint 1981 Cosmo. 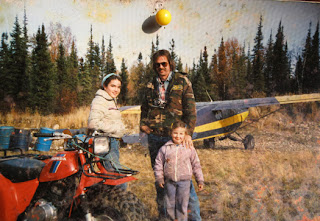 Pinned to the wall.
Shookie works the drill press in the shop. 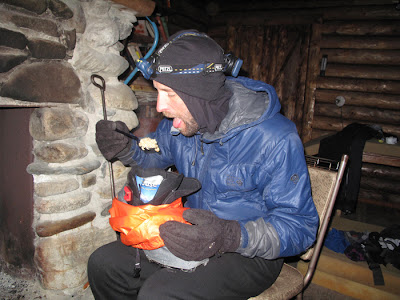 John heats his boot with his breakfast by the big stone fireplace that warmed the place from 25 to about 39. 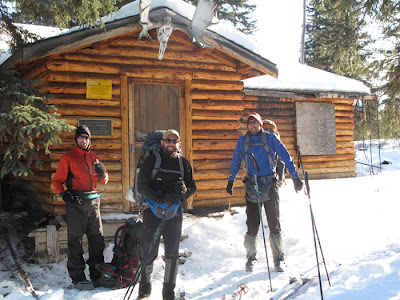 Leaving Melozi after a full day of eating, soaking and exploring.

On the way out, slightly faster than the way in. But not much. 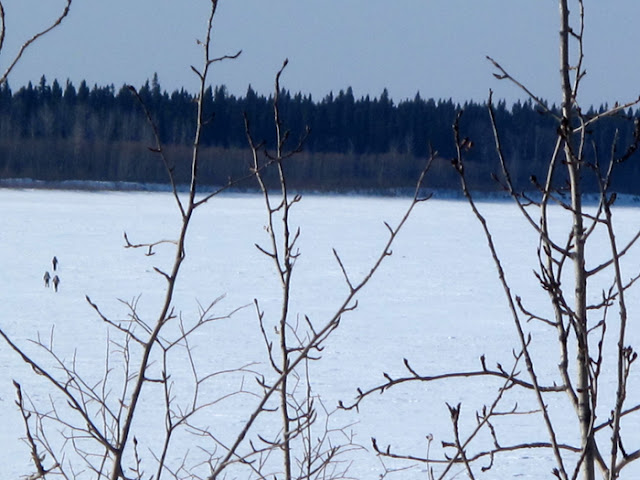 After another night of camping on the trail, it was back on the Yukon, toward Ruby. 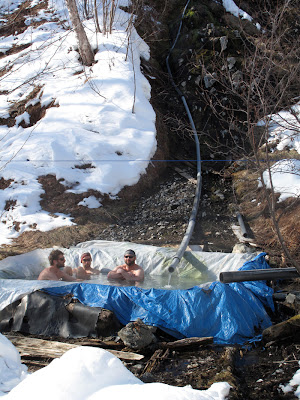 But not before hitting Horner Hot Springs, just a mile off the northern shore of the Yukon. 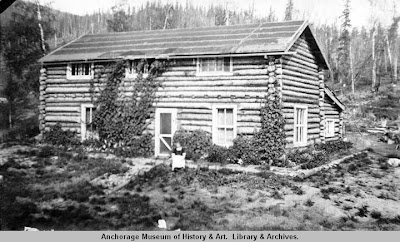 This roadhouse was on the site in the 1920s. It has disappeared. 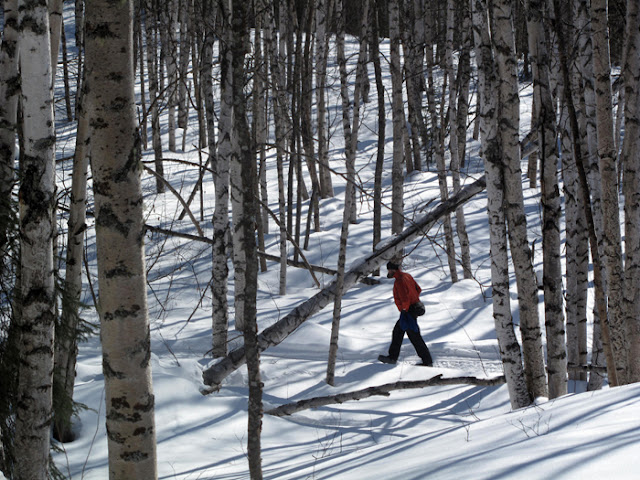 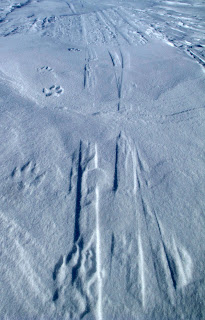 We followed a wolf back to Tamara and Sam's for a final night there. 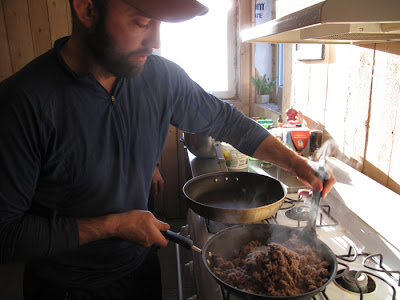 And a breakfast of goat sausage mixed with potato, fixed by Brian. Part of the thousands of calories at Sam and Tamara's. 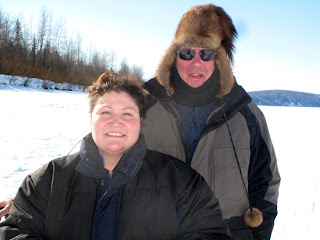 On our final day of skiing back to Ruby, we meet Ruby friends Ginger and Jay DeLima, who were snowmachining to the hot springs. Good medicine. 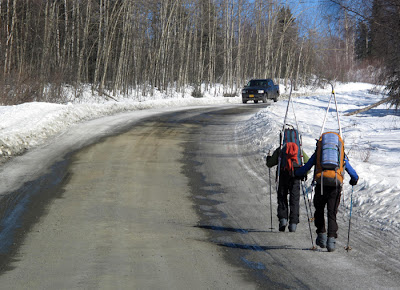 That same day, Ruby. The hike to the airstrip on a plateau above town. Just two hours to Fairbanks.

Beautiful! Many thanks for sharing your story and pictures of this trip.

Looks like a fantastic trip. You make all your adventures sound relaxing and easy.

I want to play too!

I'm a writer from England, and I'm out in Alaska for a few months. Currently in Valdez, and about to hitch north up the pipeline, passing through Fairbanks on the way to Prudhoe Bay. Having been flicking through your book about the journey, and would be interested to get in touch for a chat if you're available. You can get me at adamweymouth@gmail.com