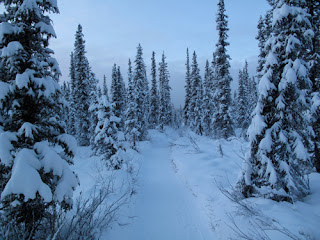 Today was the day to attempt a full day on cross country skis. Because the day is 3 hours, 50 minutes long, the goal of being out is not as hard as it seems. Because today was minus 19 degrees F, the goal was not as easy as it seems.

My traveling companion was nine years old. Poops would have been excluded had our family tried the ski your age in kilometers at Birch Hill a few days ago. But cold temps and lack of preparedness in the form of babysitter scuttled that plan. I had found more appealing a Nordic Ski Club of Fairbanks challenge to ski from sunrise to sunset, with a goal of skiing your age or 50K, whichever is more. 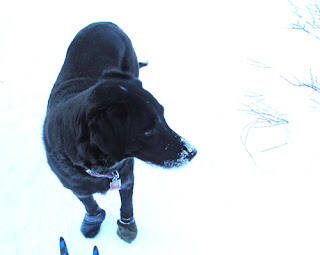 Poops, the mixed Lab/golden, and I had no such distance goal today. My aim was 1) to ski from my door to my door, with no shuttle required, 2) to remain outside for the entire sunrise to sunset period (and not need a headlamp).

Two of the elements I would miss about Fairbanks if I moved elsewhere are the consistent snow and the trails pressed into it. These trails, if I had the desire to follow them, could lead me to Nome from here, with just a few pauses to take my skis off and cross roads.

Off we went at the crack of 11, Poops with booties on her four feet that were both Velcroed and old-school electrical taped. The sharp crystals of fresh snow would irritate her otherwise, and the temp was near her cold cutoff. And mine, for skiing, but today was my opportunity, and my goal was not mileage.

I moved about as slowly as you can on skis. The cold trails along with new snow had, as a physicist would say, a high coefficient of friction. But they helped generated a lot of warmth, as long as I kept moving. And we had to keep moving, to keep man and dog happy. 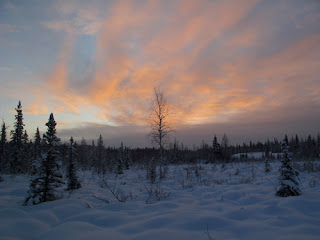 The sun never made an appearance. This photo shows the day at its brightest, and a cold overcast assured that solar panels in Fairbanks would not be tickled today (nor will they be for several weeks).

Aside from raven talk, Poops and I heard few sounds and saw even fewer moving life forms. We passed one dog musher, twice. The first time was when we backed off the Goldstream Creek Bridge to let he and his six-dog team pass. His big furry leader lunged at us in the deep snow at the side of the trail, and his team followed. The musher was not happy, but Poops didn't get beat up and the team was gone as soon as it appeared.

An hour later, we saw the team again, this time on a subdivision road as we were both moving in opposite directions as the time before. The musher pulled way off the road. From a distance, his voice carried his angry words about the team learning to obey him. I skied by and he said something to me as he held back his dogs. My skis and poles were too loud in the cold for me to hear him, and I slipped by with Poops on my tails.

On the road, slick with snow polished by car tires, I was a bit lost, and it was a nice feeling. Being sure about where you are gets so boring. But in seeing the same musher again, I knew I could follow his tracks back to the main Goldstream mushing trails, which I sought. Poops and I followed his runner marks on the road until we saw where he had came off the fresh, cold snow of the main trail. We plunged in and shortly thereafter enjoyed our first snack of the day.

The handwarmers in my mittens were doing their work, but my hands in liner gloves cooled fast in the subzero air. So I hurried. Eat my almond butter sandwich, break off some for Poops, take a swig of water from my insulated Nalgene. I also checked my GPS for the time. 1:17 p.m. More than half our day was done, and we hadn't come far. 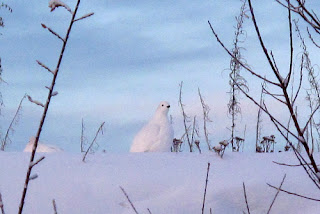 The highlight of Poops' day

I have lived in these parts for 25 years as of last August, so I have been lost on a good number of the trails. This helped me as I tried to bring 'er home before headlamp time, because I could alter my route on the slog. I decided at my snack time to head up the hill into the Dogpatch and make the turn for home. My skiing was about walking speed, so the five-mile distance was just about right.

Poops then barked and wagged her tail, sending mixed messages to three women out for a ski and heading for us. Poops' barking turned to full wagging, and the ladies kneed her to keep Poops out of their crotches.

"Where did you guys come from?" I asked, still not sure where I was on the trail system.

"Sunny Slope," said the only woman with her face exposed to the air. "You're on the main trail and will cross Ballaine soon. Keep on the right if you want to get to the truck pullout by Goldstream Creek."

From there, it was another crossing of Goldstream Creek, this one on aufeis instead of a bridge, then a head-on pass with a man walking with two lovely chocolate Labs with shock collars on their necks that probably were not operational in the cold.

Then a bend up to the Skarland Trail, which I was probably skiing on this day 25 years ago, with my own chocolate Lab. As new homes have shoved it one way and another, the trail smells more of Bounce dryer sheets than it used to. But it still exists and still has some birch trees that are fun to avoid hitting with your head on downhills.

With headlights from nearby Ballaine Road biting the dusk, I stopped for one last snack and checked my time. 2:49 p.m.

One minute past sunset. A few miles from home. We were near the house that Jim built for he and Tonda, on the lot with all the free aspen I burned for helping him clear. Jim doesn't live there anymore and Tonda moved to the Lower 48 after they got divorced, but I still think of them there every time I pass.

Poops and I were then home-free, on a little trail we had covered just two days ago on a shorter outing. Poops seemed happy and still wore all her mismatched booties as I fed her some pepperoni and then emptied the tank of my water bottle.

We passed Joanna, a graduate student at the Geophysical Institute, on the steepest part of the last uphill.  Poops barked and then wagged at her. Joanna's frosted hair said she had been out a while. She confirmed an hour of outside time, which was more than 95 percent of the other residents of Alaska today. Seeing her made me think of all the other GI grad students I've known over the years, like Adam in Norway, who never said no to a spontaneous plan, like a 50K ski on the Yukon Quest trail from Fairbanks to Two Rivers on a February day warmer and much lighter than this one.

My current adventure faded as Poops and I lurched down the sticky cold snow that coated the south-facing hill toward my home. I skied all the way down, almost to the university trails, took a right on our own private trail and skied into the yard. We had covered just 13 miles in nearly four hours.

On a Christmas-light timer plugged to the woodshed was the time. 3:11 p.m. For one near-solstice day, we had squandered none of our daylight, two minutes and one second more than yesterday's. 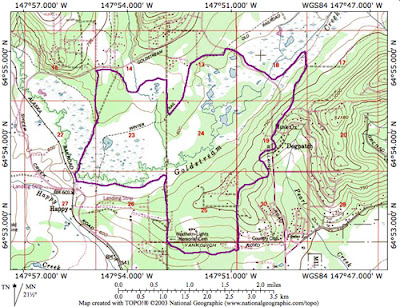